Washed by Blood: Lessons from My Time with Korn and My Journey to Christ (Paperback) 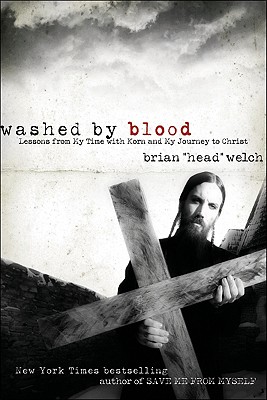 An Out-of-Control Rock Star. An Inescapable Addiction to Drugs. A Miraculous Redemption through Jesus Christ.

You think you've heard this story before but you haven't. Washed by Blood is a look at the dramatic saving power of Jesus Christ unlike any other—one that shows how God looks out for all of us, even those who seem farthest away from his grace.

Brian "Head" Welch was a rock star who thought he had it all. He was the lead guitarist in Korn, one of the biggest and most controversial rock bands on the planet. He lived in a mansion, had millions of dollars in the bank, and legions of fans all over the globe.

He was living the good life, and it should have been perfect. But it was all a lie.

What no one knew was that backstage and away from the crowds, Head was fighting a debilitating addiction to methamphetamines, and that nothing—not even the birth of his daughter—could make him quit for good. He had given up. He was empty inside. He spent his days contemplating suicide convinced that each high would be his last.

And that was when he found God.

Washed by Blood tells the remarkable story of how God's unconditional love freed Head from his addictions and saved him from death. Here Head describes the joys and struggles of his journey to faith, detailing how Jesus has helped him cope with his pain and find the path that's right for both him and his daughter. An account of triumphs, hardships, and the healing power of Jesus, Washed by Blood is an inspirational demonstration that God is always there to save even the most troubled souls.

Brian "Head" Welch was one of the founding members of Korn. In 2005, after an intense spiritual awakening, he was instantly delivered from years of substance abuse with almost no symptoms of withdrawal. Today he lives and prays with his daughter Jennea in Arizona.

END_OF_DOCUMENT_TOKEN_TO_BE_REPLACED
Russo's has proudly supported these community book-related organizations for 2+ decades:
One Book One Bakersfield One Kern     Kern Literacy Council     Writers of Kern     Kern Reading Association
THIS YEAR'S 1B1B1K EVENTS FLYER
We value your business and we welcome your comments.  You may reach the Russo family and our staff at 661-665-4686.
Copyright ©2020 Russo's Books