Inside Out and Back Again: A Harper Classic (Hardcover) 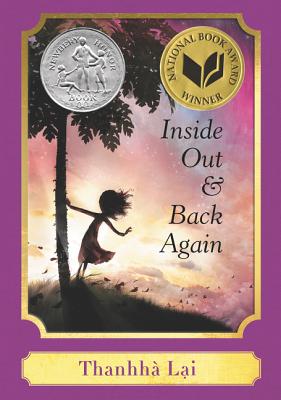 Winner of the National Book Award, a Newbery Honor, and a #1 New York Times bestseller!

Inspired by the author's childhood experience as a refugee—fleeing Vietnam after the Fall of Saigon and immigrating to Alabama—this coming-of-age debut novel told in verse has been celebrated for its touching child's-eye view of family and immigration.

This Harper Classic edition includes an author's note explaining how and why Thanhha Lai translated her personal experiences into this book, an interview with the author, an activity you can do with your family, tips on writing poetry, and discussion questions.

Hà has only ever known Saigon: the thrills of its markets, the joy of its traditions, and the warmth of her friends close by. But now the Vietnam War has reached her home. Hà and her family are forced to flee as Saigon falls, and they board a ship headed toward hope—toward America.

Inside Out and Back Again is the moving story of one girl's year of change, dreams, grief, and healing. This book was named to multiple state lists, received four starred reviews, and was hailed as a best book of the year by Publishers Weekly, Kirkus, School Library Journal, and the Chicago Public Library.

Thanhhà Lai  is the #1 New York Times bestselling author of Inside Out & Back Again, her debut novel in verse, which won both a National Book Award and a Newbery Honor, and the acclaimed Listen, Slowly and Butterfly Yellow, both of which were named to numerous best book of the year lists. She was born in Viêt Nam and now lives in New York with her family. To learn more about Thanhhà and her charity, Viet Kids Inc., visit www.thanhhalai.com.

“Open this book, read it slowly to savor the delicious language. This is a book that asks the reader to be careful, to pay attention, to sigh at the end.” — Kathi Appelt, bestselling author of Newbery Honor Book The Underneath

“Based in Lai’s personal experience, this first novel captures a child–refugee’s struggle with rare honesty. Written in accessible, short free–verse poems, Hà’s immediate narrative describes her mistakes—both humorous and heartbreaking; and readers will be moved by Hà’s sorrow as they recognize the anguish of being the outcast.” — Booklist (starred review)

“The taut portrayal of Hà’s emotional life is especially poignant as she cycles from feeling smart in Vietnam to struggling in the States, and finally regains academic and social confidence. An incisive portrait of human resilience.” — Publishers Weekly (starred review)

“An enlightening, poignant and unexpectedly funny novel in verse. In her not-to-be-missed debut, Lai evokes a distinct time and place and presents a complex, realistic heroine whom readers will recognize, even if they haven’t found themselves in a strange new country.” — Kirkus Reviews (starred review)

“American and Vietnamese characters alike leap to life through the voice and eyes of a ten–year–old girl—a protagonist so strong, loving, and vivid I longed to hand her a wedge of freshly cut papaya.” — Mitali Perkins, author of Bamboo People

“Lai’s spare language captures the sensory disorientation of changing cultures as well as a refugee’s complex emotions and kaleidoscopic loyalties.” — The Horn Book

“In this free-verse narrative, Lai is sparing in her details, painting big pictures with few words and evoking abundant visuals.” — Bulletin of the Center for Children’s Books