Cloudmoney: Cash, Cards, Crypto, and the War for Our Wallets (Hardcover) 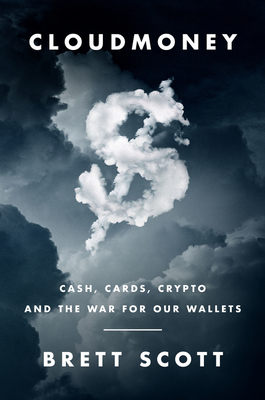 The reach of Corporations into our lives via cards and apps has never been greater; many of us rarely use cash these days. But what we’re told is a natural and inevitable move is actually the work of powerful interests. And the great battle of our time is the battle for ownership of the digital footprints that make up our lives.

In Cloudmoney, Brett Scott tells an urgent and revelatory story about how the fusion of Big Finance and Big Tech requires “cloudmoney”—digital money underpinned by the banking sector—to replace physical cash. He dives beneath the surface of the global financial system to uncover a long-established lobbying infrastructure: an alliance of partners waging a covert war on cash. He explains the technical, political, and cultural differences between our various forms of money and shows how the cash system has been under attack for decades, as banking and tech companies promote a cashless society under the banner of progress.

Cloudmoney takes us to the front lines of a war for our wallets that is also about our freedom, from marketing strategies against cash to the weaponization of COVID-19 to push fintech platforms, and from there to the rise of the cryptocurrency rebels and fringe groups pushing back. It asks the most pressing questions:

Who benefits from a cashless society and who gets left behind?

And is our cloudmoney future closer than we think it is?

Brett Scott is an economic anthropologist, financial activist, and former broker. In 2013 he published The Heretic’s Guide to Global Finance: Hacking the Future of Money, and since then has spoken at hundreds of events across the globe and has appeared across international media, including BBC World News and Sky News. He has written extensively on financial reform, digital finance, alternative currency, blockchain technology, and the cashless society for publications like the Guardian, New Scientist, Huffington Post, Wired, and CNN.com, and also publishes the Altered States of Monetary Consciousness newsletter. He has worked on financial reform campaigns and alternative currency systems with a wide range of groups and is a Senior Fellow of the Finance Innovation Lab (UK). He lives in Berlin.

“An important reflection on the new world of finance. Brett Scott writes with gusto about blockchain, crypto, and the power nexus between Big Tech and the banks in a cashless society.” — Lionel Barber, journalist and former editor of the Financial Times

“A fascinating and readable guide to the future, and how we can reclaim that future from the clutches of Big Finance and Big Tech.” — Grace Blakeley, author of The Corona Crash and Stolen

“A brilliant, fascinating, and utterly accessible book—a pioneering and political guide to the fast-evolving web of global finance. Combining anthropological insight with the financial acumen of an industry insider, Scott lays out the long view on how tech and finance are rapidly merging to supercharge corporate capitalism. If you want to understand what money is—and what it is in danger of becoming—start right here.” — Kate Raworth, cofounder of Doughnut Economics Action Lab and author of Doughnut Economics

“In a book that is simultaneously irreverent, hard-hitting, and entertaining, Brett Scott blows apart conventional myths about cash, digital money, and crypto, and brilliantly shows us what’s at stake in the coming battles for the soul of money.” — Stephanie Kelton, author of the New York Times bestseller The Deficit Myth