The Powerful Bond Between People and Pets: Our Boundless Connections to Companion Animals (Practical and Applied Psychology) (Hardcover) 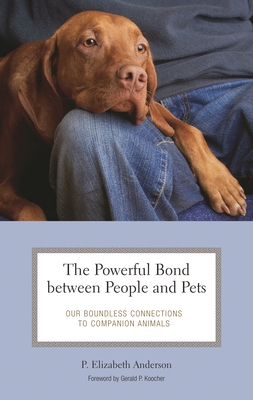 An engaging and science-based examination of people and companion animals, this book shows how their lives are inextricably intertwined, what the impact has been on culture and on society, the reasons people go to great lengths to care for and protect their beloved animals, and why the grief when they are lost is so profound and unique. Anderson, a longtime animal welfare advocate, also shows how we conversely ignore the suffering of some animals. She explains what can be done about this dissonance and what the future holds.

Anderson incorporates news stories, interviews, and the latest research showing the psychology behind this relationship that scientists have dubbed the human-companion animal bond. Research shows why these mainly nonverbal creatures can become surrogate children, friends, and even therapists of a sort. Current studies focused on animal intelligence, loyalty, and sensitivity are shared here. Those same qualities are shown at work in new and vital roles for companion animals, from animals in therapeutic settings to dogs teamed with soldiers, police officers, and rescuers. Anderson also explains how losing a pet can shake or shatter our mental stability, and how and why that has led to public services, funerals, and cemeteries for pets. The book closes with a discussion of the dissonance between our indulgence of some companion animals, while the suffering and maltreatment of others is ignored.

P. Elizabeth Anderson is a national award-winning author and journalist with more than 17 years experience in clinical research and 30 years in activities to promote and protect companion animals. She has written for publications of Duke University Medical Center, the National Institutes of Health, the Centers for Disease Control and Prevention, and the U.S. Public Health Service. Prior to writing this book, she was a writer and editor for the Humane Society of the United States. She co-authored an earlier book, Emotional Longevity, with her husband, Dr. Norman B. Anderson, CEO of the American Psychological Association.