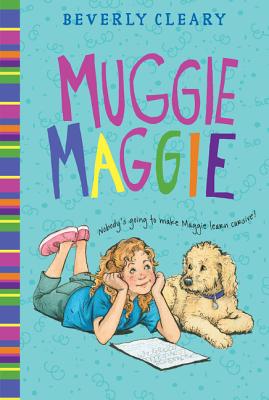 In this humorous and relatable novel from Newbery Medal-winning author Beverly Cleary, a girl must overcome her rebellious attitude toward learning cursive.

At first, Maggie is just feeling plain stubborn when she declares she won't learn cursive. What's wrong with print, anyway? And she can easily type on a computer, so why would she need to know how to read those squiggly lines? But soon all her classmates are buzzing about Maggie's refusal to learn, especially after her teacher, Mrs. Leeper, says Maggie's cursive is so sloppy that her name looks like "Muggie."

With "Muggie Maggie" ringing in her ears, Maggie absolutely, positively won't back down...until she's appointed class mail messenger. All the letters that Mrs. Leeper sends to the office are in cursive, and Maggie thinks they are written about her. But there's only way to know for sure...so what's Maggie going to do?

For generations, Beverly Cleary has captivated readers of all ages with beloved characters such as Ramona Quimby, Henry Huggins, Ribsy, and Ralph S. Mouse. Muggie Maggie follows suit with what School Library Journal calls "a likable, funny heroine whom readers will want to know."

Beverly Cleary is one of America's most beloved authors. As a child, she struggled with reading and writing. But by third grade, after spending much time in her public library in Portland, Oregon, she found her skills had greatly improved. Before long, her school librarian was saying that she should write children's books when she grew up.

Instead she became a librarian. When a young boy asked her, "Where are the books about kids like us?" she remembered her teacher's encouragement and was inspired to write the books she'd longed to read but couldn't find when she was younger. She based her funny stories on her own neighborhood experiences and the sort of children she knew. And so, the Klickitat Street gang was born!

Mrs. Cleary's books have earned her many prestigious awards, including the American Library Association's Laura Ingalls Wilder Award, presented to her in recognition of her lasting contribution to children's literature. Dear Mr. Henshaw won the Newbery Medal, and Ramona Quimby, Age 8 and Ramona and Her Father have been named Newbery Honor Books. Her characters, including Beezus and Ramona Quimby, Henry Huggins, and Ralph, the motorcycle-riding mouse, have delighted children for generations.

Tracy Dockray is a fine artist and illustrator who has contributed to more than twenty illustrated books, including the bestselling Grimm's Grimmest, Delia at the Delano, and all of Beverly Cleary's highly popular children's books, most notably Ramona. A member of the Society of Illustrators, she holds an MFA from Pratt and lives in New York City.

“Cleary’s usual perception and understanding of children, her ability to appeal to readers on several levels, and her humor are as enjoyable as ever.”
— The Horn Book

“Clever and believable. Everything in this book rings true, and Cleary has created a likeable, funny heroine about whome readers will want to know more.”
— School Library Journal