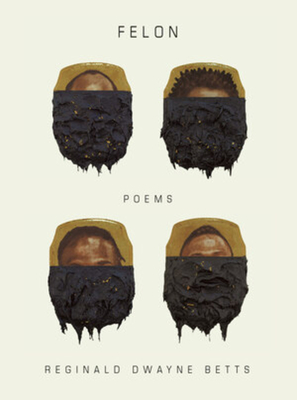 Finalist for the 2019 Los Angeles Times Book Prize in Poetry

A searing volume by a poet whose work conveys "the visceral effect that prison has on identity" (Michiko Kakutani, New York Times).

Felon tells the story of the effects of incarceration in fierce, dazzling poems—canvassing a wide range of emotions and experiences through homelessness, underemployment, love, drug abuse, domestic violence, fatherhood, and grace—and, in doing so, creates a travelogue for an imagined life. Reginald Dwayne Betts confronts the funk of postincarceration existence and examines prison not as a static space, but as a force that enacts pressure throughout a person’s life.

The poems move between traditional and newfound forms with power and agility—from revolutionary found poems created by redacting court documents to the astonishing crown of sonnets that serves as the volume’s radiant conclusion. Drawing inspiration from lawsuits filed on behalf of the incarcerated, the redaction poems focus on the ways we exploit and erase the poor and imprisoned from public consciousness. Traditionally, redaction erases what is top secret; in Felon, Betts redacts what is superfluous, bringing into focus the profound failures of the criminal justice system and the inadequacy of the labels it generates.

Challenging the complexities of language, Betts animates what it means to be a "felon."

Reginald Dwayne Betts is a poet and essayist. He is the author of three volumes of poetry and one memoir. A graduate of Yale Law School, he lives in New Haven, Connecticut, with his family.

[Felon] pushes Betts's story forward, in verse that is nimble in its diction, tone and focus. The poems are about returning to everyday American life, but in an estranged and often painful way, as if blood were rushing into a long-pinned limb.

Searing...[Bett's] critique, having largely to do with the criminalization of poverty, charges these poems and flows through them, energizing their lyric force...This is a powerful work of lyric art. It is also a tour de force indictment of the carceral industrial state.
— Carolyn Forché - New York Times Book Review

[Felon] shows how poems can be enlisted to radically disrupt narrative... Betts's poems about fatherhood [are] some of the most powerful I've read... The black bars of redacted text [in the redaction poems], which usually suggest narrative withheld, here reveal its true contours... For Betts, the way to expression passes through such troubled silences.

On every page of Felon, a book unlike anything I’ve ever experienced, there’s something far more playful, resonant, and ruggedly revealing happening. Reginald Dwayne Betts animates and really embodies the minutiae of revision in this once-in-a-lifetime art object…Betts’s artistry shows and proves a necessary breaking and blurring of the lines between wandering into yesterday, wondering into tomorrow, and wrestling with the funk of today. Betts has written the twenty-first-century book that will dictate how freedom, power and consequence are written about until the sun says enough. It is that good.

In visually arresting poems, Betts exposes systematic prejudices, legal disparities, and the emotional strain of raising two sons in a country accustomed to assuming the worst about Black males... Also found in the powerful realism of Betts's poems are vivid portrayals of steadfast love for the speakers family, while the theme of reentry beats throughout. The importance of Betts's collection cannot be overstated as current events shed light on ongoing injustices.
— Booklist

Felon is the keenest of testaments to what it’s like to have lived behind the walls, to the crucible of having one’s humanity challenged, changed, erased, to how—for the anointed—prisons persist beyond the walls. While there are poems aplenty on the mental and physical violence of prison and our unjustice system, the collection is also a moving exploration of love—romantic and familial—and how one nurtures that love against odds that at times seem impossible. Felon is bracing, revelatory work. Read it and be transformed.

Felon is a stunningly crafted indictment of prison’s dehumanization of Black men and their loved ones. Through his unvarnished descriptions of the path to prison and its aftermath from myriad vantage points—son, husband, father, cellmate, Yale-educated public defender—Betts does nothing to protect himself, or us, from what he has done and suffered and witnessed. His compassion and breathtaking literary gifts make it impossible for us to look away or remain complicit in mass criminalization’s status quo.