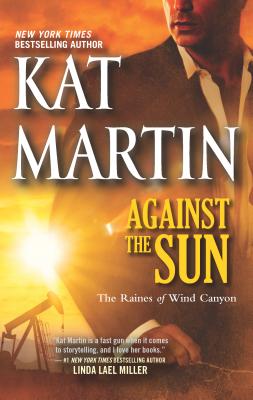 This is book number 6 in the Raines of Wind Canyon series.

It's not in bodyguard Jake Cantrell's job description to share his suspicions with his assignments. Beautiful executive Sage Dumont may be in charge, but Jake's not on her payroll. As a former special forces marine, Jake trusts his gut, and it's telling him there's something off about a shipment arriving at Marine Drilling International. His instinct is aroused...in more ways than one. A savvy businesswoman, Sage knows better than to take some hired gun's "hunch" as gospel. And yet she is learning not to underestimate the man her grandfather hired to protect her. Determined to prove Jake wrong, Sage does some digging of her own and turns up deadly details she was never meant to see. Drawn into a terrifying web of lies and deceit--and into feelings they can't afford to explore--what Jake and Sage uncover may be frighteningly worse than they ever imagined.

"As you might suspect from any Kat Martin book, this is gloriously suspenseful, magnificent reading and filled with hot and wonderful passion. Martin is superb!"-Romance Reviews Magazine on Against the Storm

"Truly a gifted author, I've never read a book by Kat Martin that wasn't immediately headed for my keeper shelf. Historical or contemporary, she's a must read for me. With Against the Storm she proves once again why I keep coming back for more."-Joyfully Reviewed on Against the Storm

"Fans of Martin's Raines of Wind Canyon trilogy are going to love meeting more of his testosterone-and-honor-laden family...the romantic suspense is tautly compelling and the psychological terror ratchets up with each red herring. Readers aren't going to be able to put the light out until the last page." -RT Book Reviews on Against the Storm