Hit Makers: How to Succeed in an Age of Distraction (Paperback) 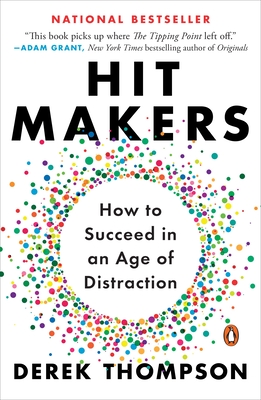 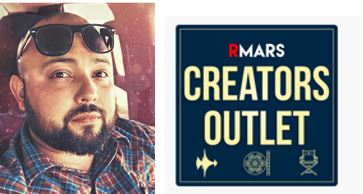 A Book of the Year Selection for Inc. and Library Journal

“This book picks up where The Tipping Point left off." -- Adam Grant, Wharton professor and New York Times bestselling author of ORIGINALS and GIVE AND TAKE

Nothing “goes viral.” If you think a popular movie, song, or app came out of nowhere to become a word-of-mouth success in today’s crowded media environment, you’re missing the real story. Each blockbuster has a secret history—of power, influence, dark broadcasters, and passionate cults that turn some new products into cultural phenomena. Even the most brilliant ideas wither in obscurity if they fail to connect with the right network, and the consumers that matter most aren't the early adopters, but rather their friends, followers, and imitators -- the audience of your audience.

In his groundbreaking investigation, Atlantic senior editor Derek Thompson uncovers the hidden psychology of why we like what we like and reveals the economics of cultural markets that invisibly shape our lives. Shattering the sentimental myths of hit-making that dominate pop culture and business, Thompson shows quality is insufficient for success, nobody has "good taste," and some of the most popular products in history were one bad break away from utter failure. It may be a new world, but there are some enduring truths to what audiences and consumers want. People love a familiar surprise: a product that is bold, yet sneakily recognizable.

Every business, every artist, every person looking to promote themselves and their work wants to know what makes some works so successful while others disappear. Hit Makers is a magical mystery tour through the last century of pop culture blockbusters and the most valuable currency of the twenty-first century—people’s attention.

From the dawn of impressionist art to the future of Facebook, from small Etsy designers to the origin of Star Wars, Derek Thompson leaves no pet rock unturned to tell the fascinating story of how culture happens and why things become popular.

In Hit Makers, Derek Thompson investigates:
·       The secret link between ESPN's sticky programming and the The Weeknd's catchy choruses
·       Why Facebook is today’s most important newspaper
·       How advertising critics predicted Donald Trump
·       The 5th grader who accidentally launched "Rock Around the Clock," the biggest hit in rock and roll history
·       How Barack Obama and his speechwriters think of themselves as songwriters
·       How Disney conquered the world—but the future of hits belongs to savvy amateurs and individuals
·       The French collector who accidentally created the Impressionist canon
·       Quantitative evidence that the biggest music hits aren’t always the best
·       Why almost all Hollywood blockbusters are sequels, reboots, and adaptations
·       Why one year--1991--is responsible for the way pop music sounds today
·       Why another year --1932--created the business model of film
·       How data scientists proved that “going viral” is a myth
·       How 19th century immigration patterns explain the most heard song in the Western Hemisphere

Derek Thompson is a senior editor at The Atlantic magazine, where he writes about economics and the media. He is a regular contributor to NPR's "Here and Now" and appears frequently on television, including CBS and MSNBC. He lives in New York City.

"Enthralling-- full of 'aha' moments about why some ideas soar and others never get off the ground. This book picks up where The Tipping Point left off."
- Adam Grant, Wharton professor and New York Times bestselling author of ORIGINALS and GIVE AND TAKE

“While giving Lady Luck her due, Thompson studiously examines the myriad factors that make the things we buy, like and follow so irresistible: whether Facebook, TV shows such as Seinfeld, Bumble (the app, not the insect), even favorite lullabies. In Hit Makers, his first book, Thompson tackles this mystery with solid research, ready wit and catchy aphorisms…a wonderful book.”
—USA Today

“Hit Makers is thoughtful and thorough, a compelling book …. a terrific look at what makes a hit, from the Mona Lisa to Donald Trump.” — Vox

"Fascinating ... Thompson has huge enthusiasm for his topic and has amassed an amazing amount of material, including many offbeat and engaging stories. ... [Should] be read for insight and provocation."  — John Gapper Financial Times

"[Thompson] has assembled a book in the Malcolm Gladwell tradition: telling great stories to illustrate some fascinating and often far-from-obvious theses." — Daily Mail

"Thompson does a really fascinating job of explaining how things become popular, drawing on a wide range of cultural phenomena, from Star Wars to the iPhone, Taylor Swift to Game of Thrones." — Ben East Observer

"Spirited ... An entertaining and informative guide." — The Times

"Derek Thompson has long been one of the brightest new voices in American journalism. With HIT MAKERS, he becomes one of the brightest new voices in the world of non-fiction books. Ranging from Impressionist art to German lullabies to Game of Thrones, HIT MAKERS offers a fresh and compelling take on how the media function and how ideas spread.  As deftly written as it is keenly argued, this book — true to its title — is a hit.” — Daniel H. Pink, New York Times bestselling author of DRIVE and TO SELL IS HUMAN

“Derek Thompson’s HIT MAKERS is a sharply observed history of the megahit, from the 13th-centuy tunic craze to the iPhone, tracing  the strange ever-changing mixture of genius, dumb luck, business savvy, and network math that turns an obscurity into a worldwide smash.”
-Jordan Ellenberg, New York Times bestselling author of HOW NOT TO BE WRONG

"What makes one song hit, and another, flop, one book a success and the other, fodder for the discount bins? That's the mystery Derek Thompson probes with his characteristic verve, wit, and insight in "Hit Makers." It's an engrossing read that doesn't settle for easy answers, and one that seems destined to become one of the hits that Thompson so deftly analyzes."
-Maria Konnikova, New York Times bestselling author of THE CONFIDENCE GAME

“Derek Thompson’s Hit Makers is a terrific read—a sparkling combination of fascinating stories, cutting-edge science, and superb business advice. Just as he does when he writes for The Atlantic, Thompson shares more interesting ideas per paragraph than practically any other writer today. Hit Makers is a bible for anyone who’s ever tried to promote practically anything, from products, people, and ideas, to books, songs, films, and TV shows.”
—Adam Alter, New York Times Bestselling author of Drunk Tank Pink and Irresistible

"I always read everything by Derek Thompson I see, and this book was no exception. Why things become popular is one of the most important questions in an ever-more networked world, and Derek Thompson's *Hit Makers* is the best and most serious attempt to take a look at it."
—Tyler Cowen, author of The Great Stagnation and Marginal Revolution

“This book is brilliant, a fascinating exploration of the relationship between artistry and industry, the ways that everything from immigration to distribution helps create the popular imagination. You may never look at your favorite film or song the same way again. It should be required reading for anyone working in the popular arts.”
—Simon Kinberg, producer of The Martian, screenwriter and producer for the X-Men film franchises

“Thompson tackles the daunting subject of how products come to dominate the culture in this interdisciplinary romp that delves into many facets of the entertainment industry as well as industrial design, art history, publishing, and politics…presenting  his case with verve and a lightning chain of compact anecdotes ….This book will appeal to readers of Malcolm Gladwell as well as pop-culture enthusiasts and anyone interested in the changing media landscape.”
— Booklist

“How does a nice idea become an earworm, or a fashion trend, or—shudder—a meme? Atlantic senior editor Thompson ventures a few well-considered answers….Good reading for anyone who aspires to understand the machinery of pop culture—and perhaps even craft a hit of his or her own.”
– Kirkus Reviews