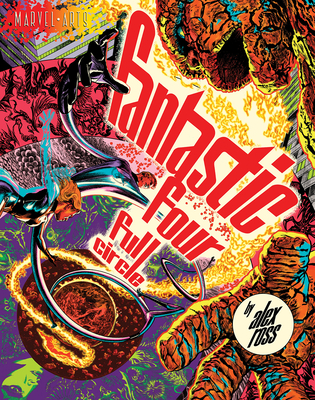 It’s a rainy night in Manhattan and not a creature is stirring except for . . . Ben Grimm. When an intruder suddenly appears inside the Baxter Building, the Fantastic Four—Mister Fantastic (Reed Richards), the Invisible Woman (Susan Storm Richards), the Human Torch (Johnny Storm), and the Thing (Ben Grimm)—find themselves surrounded by a swarm of invading parasites. These carrion creatures composed of Negative Energy come to Earth using a human host as a delivery system. But for what purpose? And who is behind this untimely invasion?

The Fantastic Four have no choice but to journey into the Negative Zone, an alien universe composed entirely of anti-matter, risking not just their own lives but the fate of the cosmos!

Fantastic Four: Full Circleis the first longform work written and illustrated by acclaimed artist Alex Ross, who revisits a classic Stan Lee–Jack Kirby story from the 1960s and introduces the storyline for a new generation of readers. With bold, vivid colors and his trademark visual storytelling, Ross takes Marvel’s first team of super heroes to places only he can illustrate. The book also features a special poster jacket, with the front flap unfolding to reveal an all-new fully painted origin story of the Fantastic Four.

Welcome to the Negative Zone and MarvelArts—a new collaborative line of books between Marvel Comics and Abrams ComicArts—where nothing is impossible and anything can happen!

Alex Ross studied at the American Academy of Art in Chicago, then honed his craft as a storyboard artist before entering the field of comics. In 1993 Marvels—his groundbreaking miniseries with writer Kurt Busiek—created a wider acceptance for painted comics. In 1996 he and writer Mark Waid produced the equally successful Kingdom Come for DC Comics, and Ross followed those up with an extensive series of work including magazine and album covers, as well as a poster for the Academy Awards. Ross has also been the subject of two monographs written and designed by Chip Kidd—Mythology: The DC Comics Art of Alex Ross and Marvelocity: The Marvel Comics Art of Alex Ross. His latest book is The Alex Ross Marvel Comics Poster Book (Abrams ComicArts, spring 2021).

“Alex Ross’s style combines tight linework and painted illustration in a color palette heavy on fluorescent shades of purple and green, warm shades of orange, and eerie blue, resulting in a distinctive pop art masterpiece that must be seen to be believed.”—School Library Journal, STARRED Review

"Journeying through dimensional portals into subspace and the psychedelic Negative Zone, Marvel’s first family confronts an old foe—one who isn’t what he seems—in this fast-paced tale undergirded by wholesome humor and gorgeous art."—The A.V Club

“The book is dynamic and vibrant, with an unmistakable Kirby influence in the mood and ton. But there are other inspirations, too, particularly Neal Adams, the classic Batman and X-Men artist."—The Hollywood Reporter

“Older fans that have watched the Marvel universe race to the stars since Fantastic Four #1, as well as newer fans only privy to the Marvel cinematic universe, will swoon over the jaw-dropping quality of Alex Ross's tribute to the Fantastic Four.”—Boing Boing

“There were few more seismic events in comics in the 1990s than Marvels, the cleverly conceived and beautifully painted graphic novel serialized by artist Alex Ross and writer Kurt Busiek. Suddenly, a new standard of realism was set for the world of comic books, soon carried over to DC Comics as well. In the past nigh-three decades, Alex Ross has gone from strength to strength, and Fantastic Four: Full Circle from Abrams ComicArts is the latest milestone along that road of excellence.”
—Roy Thomas

“Alex Ross has somehow brilliantly conjured the spirits of the original creators of the Fantastic Four and blended them with his own to bring forth a completely unique storytelling experience. Alex was already one of the great voices in comics history and now he has broken his own mold to create this psychedelic comic book energy machine that somehow also answers the question: What would comics look like if Stan Lee and Jack Kirby were alive today and still showing us all how it’s done? This masterfully executed mind worm stays with you long after you read/experience it.”—Brian Michael Bendis

“[I]n his new graphic novel, he steps outside his comfort zone into the Negative Zone to imbue Marvel’s first family with mind-melting psychedelic energy. . . . Ross also shook up his painting process, opting for flat coloring, swapping watercolor for black ink, shading in a whole new style, and adding a digital dot screen effect. The result has Roy Lichtenstein flair while still being uniquely Ross.”—Polygon

“Fantastic Four: Full Circle exists as a dazzling nexus point where Ross can skillfully reconcile the stylistic differences between himself and the King. . . . A vital component of Fantastic Four: Full Circle that one could potentially overlook is the masterfully arranged panel layouts that convey motion and momentum through their placement. . . . In addition to his panel layouts, some of Full Circle's splash and double-page spreads are awe-inspiring.”—Boing Boing

“[A] perfect combination of both science fiction and superhero storytelling. . . . With excellent characterizations, a captivating story taking the heroes to the darkest corners of the Negative Zone, and Ross changing up his signature art style to reflect the earliest era of the Fantastic Four leading to some of the best work of his career, Fantastic Four: Full Circle ends up being a masterclass in how to tell modern Fantastic Four stories.”—Screen Rant

“Fantastic Four: Full Circle is an absolutely mesmerizing artistic feat. . . . Any Fantastic Four fan is likely to find Full Circle a welcome addition to their library, and those simply looking for stunning comic book artwork will find just as much value in its pages. Ross has created a Jack Kirby tribute that does the legendary creator justice.”—Comicbook.com

“Full Circle is an essential read for those who are fans of the artist, as well as Marvel’s First Family.”
—AIPT Comics

“It’s a gorgeous book, with all the style you’d expect from Alex Ross.”—Borg.com

“The Negative Zone comes alive in the story, and somehow Ross manages to add new facets to it despite our many decades of exploration through the comics.”—13th Dimension

“If you’ve been dying for an old-school comic book story with a modern-day art style and a color palette to feast your eyes on, Fantastic Four: Full Circle is right up your alley.”—Culturess