The Eternal Soldier: The True Story of How a Dog Became a Civil War Hero (Hardcover) 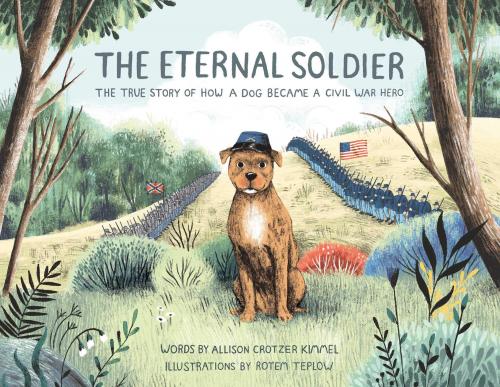 This is the untold story of Sallie, a dog whose life as a soldier began in a basket and ended as a Civil War hero.

The pup barked and nearly tumbled out of the basket. We laughed, and immediately we knew--she was one of us already.

Brindle fur with streaks of brown and black swirled all over her like a patchwork quilt. She was as pretty as an apple tree in full bloom. We called her Sallie.

During the Civil War, Sallie came to the 11th Pennsylvania Volunteer Infantry as a gift from a townsperson, but she quickly became a favorite among her men. She marched with them from battle to battle, always guarding the unit's colors, and even met President Lincoln. And over three long days at the battle of Gettysburg, Sallie stayed with the dead, guarded their bodies, and nearly died herself from hunger and thirst as the conflict raged on. Though she fell in battle, her loyalty was rewarded years later when her men met again on the battlefield at Gettysburg to erect her likeness in bronze so that she might eternally guard them. This beautiful story about a dog's dedication and loyalty shows that bravery comes in all shapes and forms!

Allison Crotzer Kimmel worked as a teacher before earning a master's of professional writing degree from the University of Southern California, and she discovered a love of children's books and joined the SCBWI soon thereafter. Allison now serves as the SCBWI Kern County regional advisor. She lives in Bakersfield, California, with three cute dogs, two even-cuter children, and one handsome husband. Learn more about her at allisoncrotzerkimmel.com.

Rotem Teplow has had a strong interest in art and illustration since childhood and always knew she wanted to be an illustrator. A graduate of Shenkar College of Design, she currently lives in Israel and works with Israeli newspapers, magazines, and publishers. Find out more about her at rotemteplow.co.il.