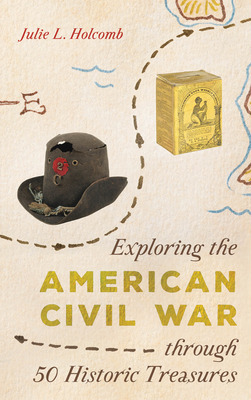 Exploring the American Civil War through 50 Historic Treasures brings together historic objects, documents, artwork, and the natural and built environments to tell the full story of this important event in American history. The American Civil War still matters. It matters because the war-- its causes and its consequences-- continue to influence America as a nation. At its core, the Civil War was about slavery. Began as a fight to secure the future of slavery, the Civil War resulted instead in the abolition of slavery. The complex racial issues at its core, however, remain with us today. Exploring the American Civil War through 50 Historic Treasures begins with the causes of the war, examining objects that tell the story of slavery and its expansion in the nineteenth century. Cultural treasures representing the war years explore the battlefield and the homefront and the men and women caught up in the war as well the ways in which the scale of the war forced technological innovations. Given the centrality of slavery, race, and emancipation in the story of the Civil War, one section presents objects that detail how free and enslaved blacks transformed the war effort and were in turn transformed by the war. In the final section, the historic treasures trace the ongoing impact of the war, including the dramatic increase in the removal of Confederate monuments in the summer of 2020. Each object's story is detailed with color photos that draw readers into the story of the American Civil War. Many of these objects appear here in print for the first time.

Julie Holcomb is Associate Professor and Graduate Program Director in Museum Studies at Baylor University in Waco, Texas. Holcomb received her Bachelor of Arts in History and Creative Writing from Pacific University, Forest Grove, Oregon; her Master of Library and Information Science, with a specialization in Archives and Records Management from the University of Texas at Austin; and her PhD in Transatlantic History from the University of Texas at Arlington. She is the author of Moral Commerce: Quakers and The Transatlantic Boycott of the Slave Labor Economy and the editor of Southern Sons, Northern Soldiers: The Civil War Letters of the Remley Brothers, 22nd Iowa Infantry. In addition to her books, Holcomb has published widely in a variety of academic and popular venues.