Onward: How Starbucks Fought for Its Life without Losing Its Soul (Hardcover) 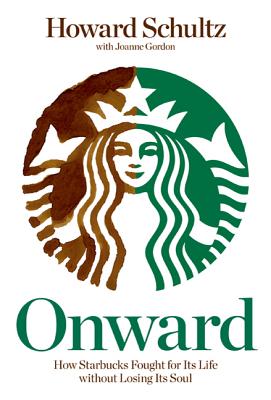 In 2008, Howard Schultz, the president and chairman of Starbucks, made the unprecedented decision
to return as the CEO eight years after he stepped down from daily oversight of the company and became chairman. Concerned that Starbucks had lost its way, Schultz was determined to help it return to its core values and restore not only its financial health, but also its soul. In Onward, he shares the remarkable story of his return and the company's ongoing transformation under his leadership, revealing how, during one of the most tumultuous economic times in history, Starbucks again achieved profitability and sustainability without sacrificing humanity.

Offering readers a snapshot of a moment in history that left no company unscathed, the book zooms in
to show, in riveting detail, how one company struggled and recreated itself in the midst of it all. The fastpaced narrative is driven by day-to-day tension as conflicts arise and lets readers into Schultz's psyche as he comes to terms with his limitations and evolving leadership style. Onward is a compelling, candid narrative documenting the maturing of a brand as well as a businessman.


Onward represents Schultz's central leadership philosophy: It's not just about winning, but the right
way to win. Ultimately, he gives readers what he strives to deliver every day—a sense of hope that, no
matter how tough times get, the future can be just as or more successful than the past, whatever one
defines success to be.

Howard Schultz is the chairman, president, and CEO of Starbucks and the author of the New York Times bestseller Pour Your Heart Into It.

Joanne Gordon is a former Forbes writer and contributing editor who has spent more than a decade profiling companies and business leaders for numerous publications including five previous books.

“In 2000, Starbuck's founder and CEO Schultz (Pour Your Heart into It) stepped down from daily oversight of the company and assumed the role of chairman. Eight years later, in the midst of the recession and a period of decline unprecedented in the company's recent history, Schultz--feeling that the soul of his brand was at risk--returned to the CEO post. In this personal, suspenseful, and surprisingly open account, Schultz traces his own journey to help Starbucks reclaim its original customer-centric values and mission while aggressively innovating and embracing the changing landscape of technology. From the famous leaked memo that exposed his criticisms of Starbucks to new product strategies and rollouts, Schultz bares all about the painful yet often exhilarating steps he had to take to turn the company around. Peppered with stories from his childhood in tough Canarsie, N.Y., neighborhoods, his sequel to the founding of Starbucks is grittier, more gripping, and dramatic, and his voice is winning and authentic. This is a must-read for anyone interested in leadership, management, or the quest to connect a brand with the consumer. ” —Publisher's Weekly, Starred Review

“Howard Schultz's refreshingly candid, compelling narrative demonstrates what it takes to lead in these extraordinary times. Onward is a rare first-hand account at how one of the world's most iconic brands overcame the challenges that confront us all.” —Indra Nooyi, Chairman and CEO of PepsiCo

“Through the lens of his personal leadership journey, with all of its dizzying ups and agonizing downs, Howard Schultz has written, with aching honesty and passion, the single most important book on leadership and change for our time and for every generation of leaders. This book is not just required reading, it's mandatory.” —Warren Bennis, Distinguished Professor of Business, University of Southern California and author of Still Surprised: A Memoir of a Life in Leadership