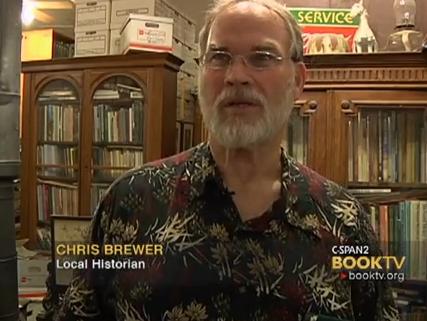 Chris Brewer is one of the Southern San Joaquin Valley's leading historians, and not surprisingly he has one of the largest private collections of photographs from Bakersfield's historic past. Chris is also the accomplished publisher of Bear State Books, as well as the great-great-grandson of Bakersfield founder Col. Thomas Baker.

Telephone Russo's Books at 661-665-4686 regarding in-stock status of the following titles:

Colonel Baker's Field takes you back and forth between the 19th and 20th centuries as you discover the lives lived by both Colonel Baker and his great-great-grandson, Chris Brewer. Read about Colonel Baker's journey across the United States and how he makes his mark in history as well as Chris Brewer's quest to learn his family's history. Rare Baker family-lore is merged with historical research to recount an incredible time in our country's history when pioneers reached beyond the impossible to achieve their dreams.  2nd edtion released in 2015.

Written by Frank F. Latta and originally published in 1949, the Handbook of the Yokuts Indians is considered by many historians and cultural anthropologists to be the single most important work on the lives and culture of the more than 60 tribes that made.  Re-released in 2014. $99.95.

Brewer has compiled and captioned over 100 quality black and white images of Bakersfield and its surrounding area. A special interest has been shown in presenting historic agricultural scenes. Most of the images in this book have never before been published and they represent a unique opportunity for the reader to see and read about Bakersfield's past.

Historian Chris Brewer has another winner with this follow-up to the extremely popular "Bakersfield & Kern Picture Album". Volume 2 again features over 80 large black and white photographs of Bakersfield's past, stretching from the 1880s to the 1960s. Brewer comments that the inclusion of more twentieth century images will stimulate memories of those fortunate enough to have been in Bakersfield for years, as well as to educate and entertain those newer to the city. Bakersfield's rich heritage, its history, and its life and times come alive in this book.

This book features nearly 100 black & white images of old Bakersfield (most between 1880 - 1925) and a brief description of each. The large 8" by 10 1/2" format enhances the photography wonderfully.

Historian Chris Brewer leads off with a photograph of his great-grandfather (and the City of Bakersfield founder) Colonel Thomas Baker. He then proceeds to keep the flame of Bakersfield's past burning brightly with this collection of 58 photographs (each with a caption) from 1890's to the 1950's.

Local historian Chris Brewer tells the history of the Southern San Joaquin Valley with nearly 100 vintage photographs and accompanying captions. A quality book for all who enjoy local history.

By Judy Salamacha, Sandy Mittelsteadt, Chris Brewer (Contributor)
Potentially Unavailable: Email or call Russo's for price and availability
ISBN: 9781892622501
Availability: Special Order -- Russo's will research title and do our best to get it for you
Published: Bear State Books - May 1st, 2013

During America's Great Migration, pioneers settled the West -- lured by dreams of riches and new opportunities. Colonel Thomas Baker, the namesake of Bakersfield, California, is an intriguing, yet unfamiliar pioneer of the 1800s.